Georgia Enjoys National Reputation as Leader in Public Pre-K: Access Remains a Problem for Many

By Caitlin Daugherty, Georgia Partnership for Excellence in Education 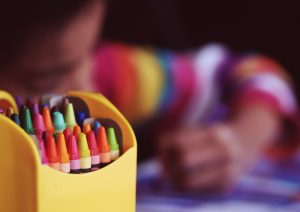 In 1992, Georgia’s Pre-K Program began serving at-risk 4-year old children and their families. By 1995, it was the country’s first state-funded universal preschool program for 4-year-olds. Since then, Georgia has continued to lead the nation in early learning.  In 2009, Georgia had the first state program to have served more than one million students in its seventeen-year history.
Currently, almost 60 percent of Georgia’s 4-year-olds are enrolled in the Pre-K program. According to “The State of Preschool 2015,” an annual report by the National Institute for Early Education Research, Georgia ranks eighth in the country for access to public Pre-K. An independent evaluation of the Georgia program by The Frank Porter Graham Child Development Institute at the University of North Carolina at Chapel Hill has been ongoing over the past four years. Key findings of the first two years of the study include:

Of students enrolled in Georgia Pre-K, about 63 percent are non-white, and 53 percent are from low-income households. While some 4-year-olds who are not enrolled in the Georgia Pre-K Program are in other preschool programs, many are not enrolled at all. Availability of Pre-K opportunities is still lacking for many students. Low-income and Hispanic families are those that historically have been least likely to enroll their children in early learning programs. This can leave those students at a disadvantage as they may not be as prepared as their peers when they start formal schooling. Studies show that this access is crucial in alleviating the achievement gaps that exist for minority and low-income students.
Researchers have begun to examine the impact of broad-based programs, like Georgia’s, with increased access to large groups of children. Using achievement gains made by students that completed the Georgia’s Pre-K Program, researchers estimate that adult earnings for these children will increase by 1.3-3.5 percent; this shows a strong return on the money invested into these programs.
While Georgia has set itself apart as a leader in providing Pre-K to 4-year-olds, the state must continue to increase access to this program. With broader availability of public Pre-K, all students, no matter their background, will be more prepared for school, and, in time, will excel in the workforce. An investment in quality Pre-K today is an investment in a stronger economy of tomorrow.

Georgia Partnership for Excellence in Education:  Founded in 1992 by the Georgia Chamber of Commerce and the Georgia Economic Developers Association, the Partnership consists of business, education, community and government leaders who share a vision of improved education in our state.
The organization is an independent, nonpartisan, nonprofit working tirelessly to be Georgia’s foremost change agent in K-12 public education. The Georgia Partnership often takes lead roles in efforts to shape policy and reform education but gladly partners with other groups or organizations taking lead roles in a variety of efforts.

We are a nonprofit child policy and advocacy organization that envisions a Georgia where children are safe,
healthy, educated, employable, and connected to their family and community.